The Daily Mail - whose readers may not agree with what someone says but will fight to the death for their right to say it - is predictably outraged after a Muslim (gasp!) artist put together a (pretty crappy) piece of work based around the London bus that was destroyed by the 7/7 bombers.

"A Muslim artist has sparked outrage with his depiction of the ripped-apart bus destroyed in the 7/7 terror attacks.

"The artwork shows four angels flying above the bombed number 30 bus - the same number of Al Qaeda terrorists who took part in the atrocity which left 52 commuters dead and maimed hundreds more on London's transport network.

"Also seen are scores of ghostly souls shooting from the bus, which was travelling through Tavistock Square when it was devastated by suicide bomber Hasib Hussain."

The paper hasn't bothered to check whether the four angels are supposed to depict the four bombers, they're just assuming that because the artist is a Muslim who said he "wants to shock people" his work must be a "tribute" to the murderers. Nor has the nameless journalist managed to find anyone who is "outraged" - the only third party quote comes from the father of a woman who died on the No 30 bus, who (understandably) says the artwork is "upsetting".

All typical Mail stuff, but not on its own worthy of comment. However, there is one aspect of the story that we can't let pass. As further proof that the man behind the picture is some kind of Al-Qaeda sleeper agent, the paper tells us that:

"The artist has also used photo trickery to write the message 'Outright terror... bold and brilliant' on the side of the bus."

Photo trickery? Or just "a camera"?

As has been noted many, many times one of the sad ironies of 7/7 was that the side of the bus was carrying an advert for the film The Descent. An advert that included a quote from a review in Total Film magazine. A review that said: 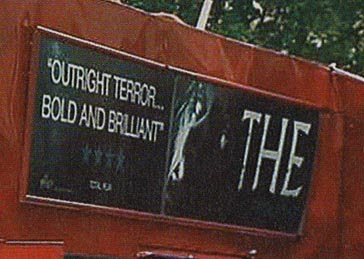 Closer inspection of the story reveals there's even more to this than meets the eye. The BBC's coverage concentrates purely on the fact that using am image from 7/7 is controversial. The full quote given by the artist reads:

"What I'm trying to do is to make anyone that has a faith, a belief, or an idea they hold close to their heart to think about the impact of these ideas when they leave their heads. I wanted to jolt people into seeing the results of these thoughts put into action. It is a grotesque thing that happened. The inquiry is to establish the facts and find out out what happened and to make sure something like this doesn't happen again and that is partly what my image is trying to do. It is meant to make people think about the effects of faith." (emphasis added by me).

Do they sound like the words of someone who wants to "glorify" the bombings and "pay tribute" to the killers? Even the Sun didn't try and claim that four angles = four bombers (although it did point out that there were four of each), and at least it managed to point out that "Outright terror" was written on the side of the actual bus.

But over at the Mail, they're sticking with the story that the picture is an "angelic tribute" to the bombers, despite there being abosolutely no evidence to back up their claim. And the results in the comments section are fairly predictable: 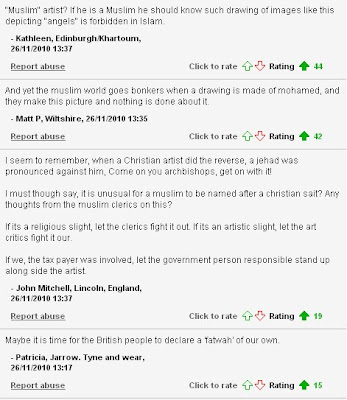 It seems the reference to the photo trickery has now been removed (the Mail's article was edited at 3:57pm).

At least I admit it when I edit things post-publication....

I realise I'm a little slow here, but... do you know the name of that prayer that includes the line "If I die before I wake..." and includes reference to 4 angels? Perhaps a shock they've not picked up on that, given that it seems everything that isn't overtly Christian (eg Winterval being more than just the 25th) gets pulled out this time of year, however old or irrelevant...

Meh. Rant space. Thank you for providing for a small one.

I particularly like the top-rated commenter on the Mail site, Kathleen from "Edinburgh/Khartoum", as if Edinburgh is some kind of hotspot for 'them foreigns' (for anyone who's not been to Edinburgh, it's probably one of the least ethnically diverse cities in the UK).