A Conservative councillor in North Wales has found himself in a spot of bother after allegedly telling a meeting that Hitler "had the right idea" when it came to dealing with gypsies. As this idea involved sending nearly a quarter of a million innocent men, women and children to the death camps, it's understandable that quite a few people are now calling on the councillor to resign.

Even the Daily Mail's coverage is fairly critical in tone:

However, the paper's readers are only furious with one thing - the fact that the councillor is being criticised. Sort the comments in order of "green arrows" and you quickly discover that hundreds of Mail readers think that gassing people to death is a perfectly sensible course of action:

A bit further down there are fewer green arrows but the messages are still getting a positive reaction:

Yes, you read that correctly - according to RP in Daventry, the "great majority" of people in England think that gypsies and travellers should be sent to the gas chamber. And at least 18 readers of the Daily Mail agree. It does make you worry. Although perhaps we shouldn't be suprised - I've pointed out before that many of the Mail's readers are keen on a spot of recreational gypsy-killing.

To be fair to the Mail's readership, most of the commenters don't explicitly support genocide. They prefer to complain about yet another example of political correctness going mad and how you can't say anything anymore without the thought police locking you up and so and so forth: 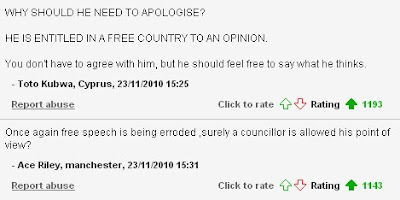 And of course someone had to quote Voltaire: 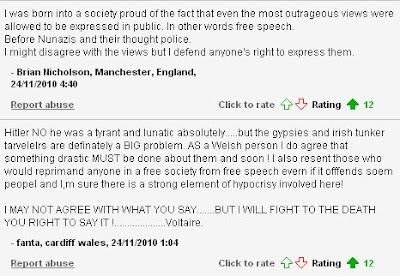 However, cast your mind back a fortnight to 11 November, when a small group of Islamic extremists protested against Britain's armed forces by burning poppies during the two-minute silence. Did the Mail's readers rush to defend the protesters' freedom to express their views, however, abhorent many people found them? Did they fuck: 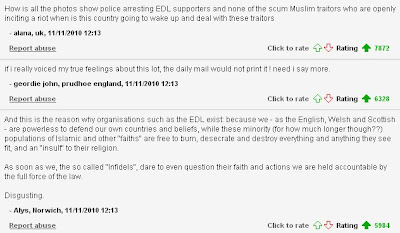 But perhaps the most interesting reaction was the almost 500-strong net "red arrow" rating to the person who said this:

Freedom of speech: only applicable when we agree with what's being said.
Posted by P. Stable at 14:43

wading through the DM comments - you're a braver soul than I

I try not to do it too often. Tends to make me fear for the future of western civilisation.

I always like how people seem to equate free speech with consequence-free speech. If you really want to claim that the genocide of travellers is a good thing then fine, but if you're mayor of somewhere and you suggest that murdering your constituents is "the right idea" then you probably shouldn't be surprised if people decide that maybe you're not such a good choice for mayor after all.

I also saw on the same day of the story of the councillor the story about a concentration camp guard who was the 3rd most wanted by the Wiesenthal centre. Most of the comments were about why they're still hunting the Naziz and one comment called Wiesenthal and his organization self publicizing. Just goes to show what Mail readers really think.

I really worry about the education standards in this country.

Hitler, who little more then fifty years ago was responsible for the genocide of six million, is known as a 'thought police' style kill-joy rather then a mass murderer.