Journalist can't abide people making money from the royal wedding, so gets paid to write 500 words about how awful it is

Mail columnist Sandra Parsons is displeased with the news that the company owned by Kate Middleton's parents is launching a "Royal Wedding scratchcard", prompting this moan:

"Yesterday, I went on to their Party Pieces website to have a closer look at the scratch cards. I typed 'royal wedding' into the search facility and up popped an entire menu of offerings, from 'royal wedding Kate' — which throws up 24 products — to 'royal wedding party products', which brings up a jaw-dropping 1,883 items, an endless array stretching from drink stirrers to invitation holders to cake boxes."

For the purposes of comparison, I typed "royal wedding kate" into the Daily Mail's search facility. I don't know if the 759 results it brought up counts as "jaw-dropping", but I do know that it's more than 30 times as many hits as the Middletons had on their site. The simple phrase "royal wedding" produces 2,679 hits on the Mail's site, which isn't so much jaw-dropping as jaw-falling-off-your-head-entirely-inducing.

And as for those 1,883 hits on "Royal wedding party products", is Parsons really that shocked given that the company in question sells party products, and that a lot of people buy party products for their own weddings? Further inspection suggests that the search engine is returning matches for ANY of the words, not ALL of them - which is why it turns up things like this: 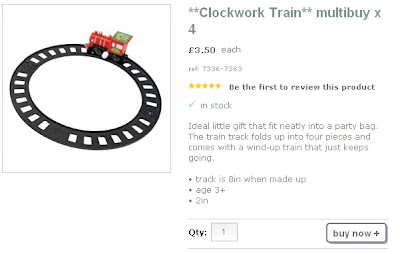 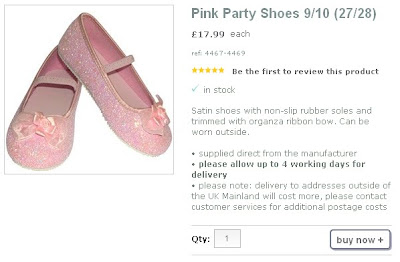 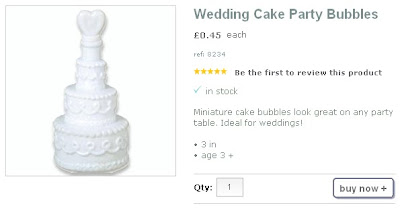 Yes, those awful Middletons. Why can't they stop cashing in on their daughter's wedding with their clockwork train sets and their pink party shoes? I bet on the day of the wedding they'll even sink so low as to try and cash in by producing a 36-page full-colour souvenir supplement about the day...
Posted by P. Stable at 08:47 4 comments:

Remember last year when I pointed out that Ed Miliband seemed to be drawing inspiration from JFK during his speech at the Labour conference? Well the speechwriter behind yesterday's David Cameron address also seemed to have read a few too many "Great Speeches of the 20th Century" books:

"From Aberconwy in the North, to the Vale of Glamorgan in the South.
From the mountains to the valleys.
The message rang out..."

Of course, Dr King's speech was a plea for racial tolerance, equality and justice for all. Cameron's speech was a call for a "No" vote in the AV referendum.
Posted by P. Stable at 08:15 No comments:

Daily Mail headline of the year

For some reason Mail Online doesn't mention in the headline that one of those newspaper websites was Mail Online. Still, kudos to the Northcliffe House massive for actually running this story online, even if they have disabled reader comments "for legal reasons". The other guilty party, the Sun, hasn't found room for the news on its website.

When is a German not a German?

Yesterday a gunman in Frankfurt shot dead two American airmen as they boarded a bus outside the German city's airport. The Mail has, via German paper Die Welt, got hold of a picture of the prime suspect. Here's the headline:

So he's a Kosovan? Someone from Kosovo, right? Which is why the Mail also provides a handy little box-out explaining all about the way Kosovans in Kosovo keep getting recruited by terrorist groups: 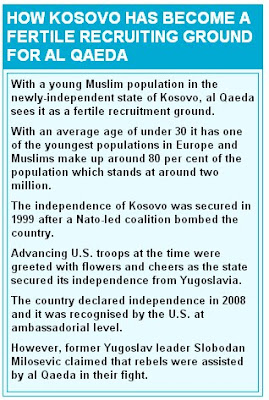 But hidden away in the middle of the story is this factoid:

"Uka, whose family come from the northern town of Mitrovica, was born and educated in Germany where his family moved to some 40 years ago."

So this Kosovan Muslim was actually born and raised in Germany a mere two decades after his family arrived in the country.

At least the Mail is being consistent - the paper has previously suggested that second- and third-generation immigrants in this country are not actually British, hence the suggestion that its headline on 29 April should read "Immigrant's grandson marries unemployed woman, moves to lavish house paid for by YOU".

The Mail also has form on this issue in Germany. Ahead of England's catastrophically poor showing in the second round of the World Cup last summer, they came up with this little gem:

There was also a nice little graphic to explain just how foreign those cheating Krauts are:

Close reading shows that of the 11 "foreign" players, six were born in Germany. Boggle-eyed Mesut Ozil is included in the list of foreigners despite being born in Germany to German parents, because his folks "are of Turkish origin". The Mail never got around to claiming that Ashley Cole (father born in Barbados), Emile Heskey (mother from Barbuda, father from Antigua) and David James (father from Jamaica) were "foreigners"...