Whatever you think of the royal family, and in particular Dianamania, you can't deny that Charles Spencer's speech at his sister's funeral was a powerful piece of oratory. Let's look at one section in particular:

"It is a point to remember that of all the ironies about Diana, perhaps the greatest was this - a girl given the name of the ancient goddess of hunting was, in the end, the most hunted person of the modern age. She would want us today to pledge ourselves to protecting her beloved boys William and Harry from a similar fate and I do this here, Diana, on your behalf. We will not allow them to suffer the anguish that used regularly to drive you to tearful despair."

In the aftermath of Diana's death and funeral, Fleet Street exercised its usual total lack of self-awareness by attacking the paparazzi photographers they blamed for Diana's death. With Earl Spencer's words filling their sails (and ignoring the bit where he pointed out that the tabloid press were "at the opposite end of the moral spectrum" to his sister) they laid into the evil men on motorbikes who had (literally) driven The People's Princess to her death*.

With one eye on its sales figures and the other on what is arguably Private Eye's greatest-ever front page, the owners and editors of the Daily Mail decided to take a moral lead. They pledged there and then that never again would the Mail purchase or publish photos taken by paparazzi snappers that intruded into the private lives of individuals, regardless of how famous they were.

Thirteen years later, all that is obviously forgotten. We're well-used to the long-lens pictures of famous women going about their daily lives, taking their kids to ballet lessons and so on. Today the Mail even has what is clearly a long-lens pic of a 17-year-old girl sharing a moment with a male friend in a nightclub.

But bearing in mind that the pledge to never again publish paparazzi photos came right after Diana's death, and right after her brother pledged to protect her children from the press intrusion that "used to regularly drive" their mother to "tearful despair", I'd like to know the Mail's justification for publishing this piece of vitally important news: 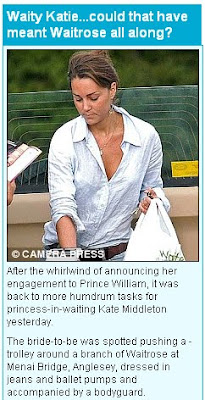 Yes, that's right folks - Diana's eldest son's bride-to-be went shopping in the town near where she lives! In jeans! And ballet pumps! And there are photos to prove it! Photos from Camera Press, an independent photo agency that specialises in photos of celebrities and royalty! According to well-placed sources, Anglesey is currently crawling with freelance photographers who are all eager to get a potentially lucrative snap of Ms Middleton going about her daily business. And with the Mail providing a ready market for their wares, who can blame them?


*And yes, I'm well aware that she was ACTUALLY driven to her death by a drunk driver and would probably have survived if she'd been wearing a seatbelt, but bear with me here, OK?

That "story" about Miley Cyrus makes me shudder... it actually looks like cctv footage or something. Urgh.

On the subject of CCTV footage, the Mail recently got in trouble for publishing CCTV stills of Kate Middleton and Prince William popping into a North Wales corner shop.

It constituted a breach of the data protection act, and has now been removed from the paper's website. Presumably such rules don't apply in the USA.