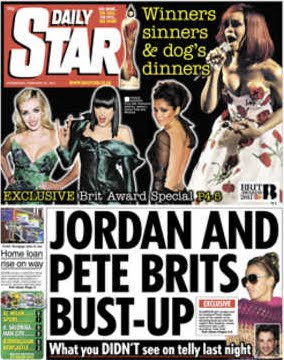 Reading the headline and the "What you DIDN'T see on telly last night" teaser, you could be forgiven for thinking that Katie Price and that guy who had that song in the mid 90s and then went on that show in the jungle had a bust-up at last night's Brit awards. One assumes the bust-up took place behind the scenes, as you DIDN'T see it on TV.

The story, however, tells a different, er, story:

The 32-year-old glamour gal withdrew to avoid a row. Kate had a ticket – but organisers made it clear they did not want her there in case she had bust-up with Peter.

She blasted a claim – “the source of which is sadly obvious” – that she would pick a row with Peter, 37, there for ITV2.

But Kate said she did not want to distract attention from the stars “so I will cheer them on in front of my TV”. A pal said: “She has been stitched up.”

A Brits source said: “It was felt best to let her make her own
decision with dignity, rather than face being barred.” Peter, 37, said he was not involved.

In other words, Jordan and Pete DIDN'T have a bust-up at the Brits, because she didn't go. And the reason you didn't see it on TV is because IT DIDN'T HAPPEN.

Other things you didn't see on TV last night included Mumford & Sons being hacked to pieces by an angry mob of Take That fans (fun though that would have been), and Laura Marling delivering an extraordinary expletive-filled racist diatribe aimed at Régine Chassagne while accepting the Best Female Artist award. Strangely the Star neglects to report on these other entirely made-up events.
Posted by P. Stable at 07:50

Seems I've been reading too much BBC and not enough Star. I saw the headline to this post and wondered why the Star might want to be smearing King Abdullah.