Intrusion into grief or shock

Along with several other papers, today's Daily Mirror splash relates the sad story of Jemma Benjamin. The Welsh 18-year-old died in 2009, and yesterday the Aberdare coroner delivered a narrative verdict, which explains that she died from sudden adult death syndrome. SADs is the catch-all term for death caused by the heart failing for no discernable reason.

The press were particularly interested in Jemma's death because she collapsed while kissing a man - some papers have claimed it was her first-ever kiss, some have said the man was her boyfriend, others that he was just an acquaintence. So there are lots of unknowns and variables about this case, but one thing is certain - the Mirror's coverage is a crock of shit: 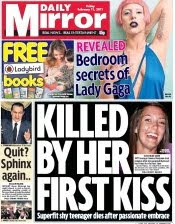 Yes, that headline really does read "KILLED BY HER FIRST KISS". It gets worse inside, where spread across page 11 is the headline "KISS OF DEATH". For the avoidance of doubt, the cause of death was not recorded as "being kissed".

Quite how this absurd sensationalism will go down with her family, let alone the man who kissed her, we can only speculate. We can also only speculate as to how the Mirror's editors thought these headlines fitted with with the PCC code - both its clause one demand for accuracy and the oft-ignored clause five:

5. Intrusion into grief or shock
i) In cases involving personal grief or shock, enquiries and approaches must be made with sympathy and discretion and publication handled sensitively. This should not restrict the right to report legal proceedings, such as inquests.

Clearly they'd thought better of it by the time the story went online, where the headline is much more sober and accurate.

It's been a busy week for "Killed by..." splashes in the Mirror - just yesterday they had this: 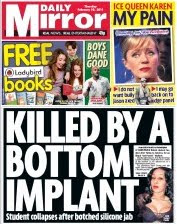 And back on 4 February they went with this: 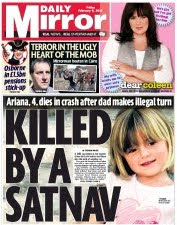 Is "whacky attribution of death" becoming the Mirror's version of the Express's endless McCann family "stories" and the Star's creepy obsession with Jordan?

Well-spotted. Do you think this is grounds for a complaint to the PCC?

It would almost certainly have to come from the young woman's friends or family, so probably not.