What a difference a day makes

As has been pointed out on countless occassions by countless members of what I should probably call the "tabloid-watching community", the Daily Mail website (motto: "News is far more important to us that showbiz. News is what drives our site") likes nothing more than publishing pictures of young ladies in various states of undress.

So when the Mail was offered "raunchy" pictures of Glee's female cast members in return for a huge plug for gentleman's fap-mag GQ, there was never any doubt that such important "news" would be given extensive coverage. So extensive, in fact, that the paper eeked TWO stories out of it in one day.

First there was this: 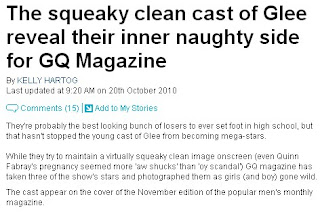 Then there was this: 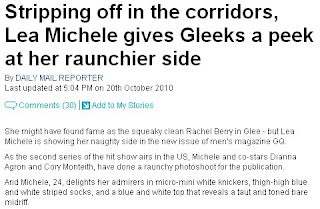 The byline on one article is the classic "Daily Mail Reporter", but it could just as well be "Dirty Old Man" judging by the content:

"Michele, 24, delights her admirers in micro-mini white knickers, thigh-high blue and white striped socks, and a blue and white top that reveals a taut and toned bare midriff ... She pulls the ensemble together by sucking on a lollipop and leaning suggestively against a school locker. Co-star Dianna Agron also features in the shoot, at one point wearing a sexy cheerleader outfit with a barely there skirt and red high heels."

But by this morning, the moral tide was turning. Instead of the fun and frolics of the day before, the thought of seeing Quinn and Rachel in their smalls was enough to provoke that old favourite of the Daily Mail - FURY! 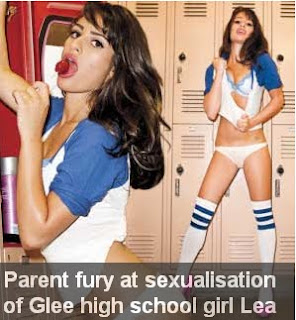 As the outraged members of the USA's Parents Television Council say:

"It is disturbing that GQ, which is explicitly written for adult men, is sexualizing the actresses who play high school-aged characters on Glee in this way. It borders on pedophilia. Sadly, this is just the latest example of the overt sexualization of young girls in entertainment."

Many other examples of the overt sexualisation of young girls in entertainment can, of course, be found all over the Mail website. Including on the story in question - so that the Mail's moral readers can see just how outrageous the pictures are, the article helpfully includes four of them. On top of the seven used in the other two stories. Plus two more of Lea Michele in character, dressed in a school uniform. Which prompted one of the Mail's window-licking readers to comment: